EAST ORANGE – Students in the East Orange School District take the current conditions of minorities’ lack of healthy eating seriously. Their extensive research revealed the link between chronic diseases and poor nutrition. As a solution to combat this problem, the students addressed the lack of land in urban cities available to promote traditional farming in the urban environment.

The students worked as public health and urban planning interns under the leadership of Roland Whitley, Executive Director of Community Technical Assistance, Inc. (CTA), to think critically about pressing urban issues and their ability to promote positive change. Although the majority of the interns attend East Orange Public Schools, interns also came from Newark Vocational, Orange, Bloomfield, and Morristown Public Schools. Mr. Whitley states, “New Jersey’s Public School Students are the best and brightest in the Country and when faced with a challenge have shown that they can compete and provide concrete solutions to move the State forward.”

Some of the challenges that the public health interns addressed are in direct alignment with the US Department of Health and Human Service’s Healthy People 2010 and the NJ Department of Health and Senior Service’s NJ Strategic Plan to Eliminate Health Disparities which reflected that Black/African America and Hispanic/Latino persons have witnessed the highest levels of problems with chronic diseases such as diabetes (sugar), heart failure, cardiovascular diseases, asthma, and obesity that impact our healthcare system and prematurely shorten lives. Likewise, the urban planning interns learned what the urban environment is by learning its’ people, defining the urban edge, analyzing the horizontal and vertical nature of its buildings, and determining the best and highest use of land. The end result is to bring fourth concrete solutions for the City of East Orange, County of Essex, State of New Jersey and the Nation. 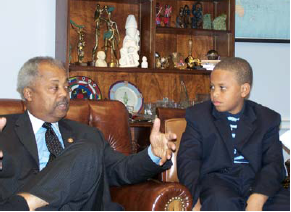 The interns have met with United States Senator’s Frank R. Lautenberg and Robert Menendez and US Congressman Donald M. Payne Offices in Washington DC and Newark, Assemblywoman and State Speaker Shelia Oliver, Essex County Freeholder Carol Clark and local Mayor’s Robert L. Bowser and Eldridge Hawkins Jr. over the past four years to discuss their concerns and to seek feedback from all of their political decision makers about how to move the State and local areas forward. “Seeing our students putting into action their power and absolute resolve to help save the lives of others has been a joy to watch. We are prayerful that the student voices will not be unheard,” Mr. Whitley stated. 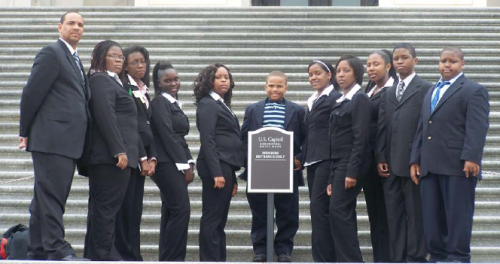 Carolyn Fefferman, Senior Advisor to US Senator Robert Menendez was impressed by the interns during the site visit to their Newark office. “The students are extremely prepared as they are able to articulate issues that affect their community. The program is outstanding and is doing a great public service by creating future leaders,” she said. Fefferman also believes that with concrete solutions the results could be a significant change that could have an impact for their project, state and nation, which supports healthier eating and access to quality nutrition. 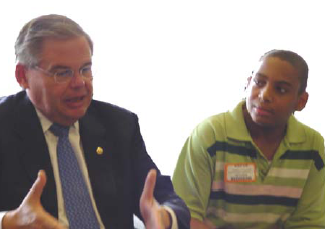 The urban planning interns struggled with the urban environment and how much is required within the limits of the city to provide a place for people to live, work, and relax, making it virtually impossible to do any type of traditional farming. Given the facts that traditional farming requires a significant amount of horizontal land, the student interns had to think critically and discover an alternative approach to helping people eat healthier. The 2000 census reported that the City of East Orange had a total population of 69,904 persons residing within 3.9 square miles. The largest tract of vacant land dedicated to open space, Soveral Park 10 acres, made any type of farming difficult. The concept of urban farming was researched in order to respond to the verticality of the city and maybe have a better chance of being acted upon. Up against the basic principal of zoning to regulate and control the land uses bye encouraging the best and highest use of land, the student’s analyzed the current zoning ordinance and revealed that possible locations of urban farming could take place within the Industrial Districts (IND), which in most cities have been abandon or underutilized. If the abandon sites could become occupiedurban farms, more jobs would be created, cities would become more greener, and more importantly people would have access to fresh vegetables and fruits to eat healthier. Jennifer Dumel an urban planning intern stated, “We looked at the zoning ordinance and did not see where agriculture or farming was included as a principal or conditional permitted use. At first, we were upset because how could we help people if you can’t do it legally. However, our understanding of why agriculture or farming was excluded as a use helped us tremendously since the ordinance is trying to promote the best and highest use. However, we feel that the City should look into how the zoning ordinance should be changed to include urban farming. It’s simple just allow urban farming that grows vertically a large amount of vegetables and fruits to serve 69,904 individuals.”

The interns worked with Vanessa Baez, TDC Program Manager from NJIT School of Architecture and Design, to understand how much food was required to meet the needs of people. “The average American consumes 200 lbs. of fresh produce per year, which is equal to 10 square feet. If the City wanted to provide fresh produce for everyone, there would need to be about 16.05 acres of horizontal land” she said. Her vertical recommendation was to accomplish urban farming on large scale production and explore hydroponics also. Mr. Whitley stated, “Urban farming is a term that the interns have truly struggled with.  They researched case studies that revealed some advantages which are a). year round farming can take place, b). carbon footprints can be reduced, c). access to fresher vegetables and fruits could happen, d). new employment opportunities are created, and e). sustainable environments become real.”

The students learned first hand that horizontal farming is limited to the available land. They built raised plant beds and planted vegetables and fruits during their eight week summer sessions, using 812 linear feet of lumber and hauling 60 yards of clean top soil. They planted vegetables such as peas, string beans, butter beans, okra, mustard greens, collard greens, cucumbers, cabbage, bell pepper, pumpkins, sweat corn, and fruit such as tomatoes. Richard Edwards a public health student intern stated, “we debated if tomatoes were really a fruit but after we researched it. We found it is really a fruit because it has seeds and the way it grows.” Mr. Whitley stated, “This program year we incorporated sweat equity with critical thinking to give the students a since of how things get done. The students had to learn group work, collaborations, thinking on your feet, and engaged in physical labor.” Amber Whitley a public health student intern stated, “Moving that dirt was not easy because it was hard to move from outside to inside the courtyards with two wheel barrels and we had to do our presentations about our project at the same time. I feel that more prepared to become a lawyer because I will have to think on my feet and at the same time meet my deadlines.”

The students are interns for Community Technical Assistance, Inc. (CTA) Transforming Distressed Program (TDC), which is an applied learning based program that links the student’s academic education with real-world community development projects. Since 2002 the inception of CTA, the non-profit organization has focused on the low-to-moderate income communities in order to assist in their transformation. Their TDC program is in its fifth year of existence and engaged more than 500 public school students to become leaders in their community. The students receive a stipend through generous support of foundations and private corporations to help promote positive change. CTA has effectively created a national based model to promote the achievement of young people and help their respective communities. The goals of the TDC program are to link and improve student’s academic education, increase the awareness of college education, prepare youth to be successful in the workforce, and better connect youth to their community. Mr. Whitley states, “A critical component of our TDC program happens during the summer. Our research has determined that summer learning among minorities is a significant issue to due to the drastic educational gap. Students typically learn at the same rate during school but the summer is where we find more of our kids doing very little meaningful learning. We make summer learning fun, rigorous, challenging and find real results in our students.”

The program included targeted basic skill development in the mathematics and reading comprehension for a total of 30 hours during the summer. The curriculums were designed to inspire the students to learn and to teach them a solution to attain outstanding results. The pre
and post test data reflected an increase in student scores from being slightly below average too becoming above average. The students learned in a small group (5:1) ratio setting from certified teachers. The teachers introduced learning in many different ways and incorporated differentiated instruction that invited the students to learn through active participation. Tatyana
Crute, an eight grader intern, stated, “I had so much fun learning. Our tutor taught me the basic fundamental skills in math and reading and I began to slow calm down. My confidence increased and I just felt better about myself.”

This program year more interns are returning as college mentors that graduated from the program that now attend Rutgers University New Brunswick and Montclair State University. Jevonna Morrison, college mentor, “I was a student intern for three years in the program and my grades increased along with my SAT score. As a result, I was accepted into Rutgers University and
intend to major in Urban Planning at the Edward J. Bloustein School of Planning and Public Policy. Returning as a Project Manager Assistant is the most exciting part of being a college mentor because I get to give back to my community and help develop the middle and high school students just like me.”

The program is designed to continue through the school year as part of the continued effort to seek city, state and national movement for ninth graders to eat healthier. To achieve this, the students will seek First Lady Michelle Obama Let’s Move Initiative to battle obesity, and generate a statewide and national campaign aimed at helping ninth graders eat healthier in public schools.